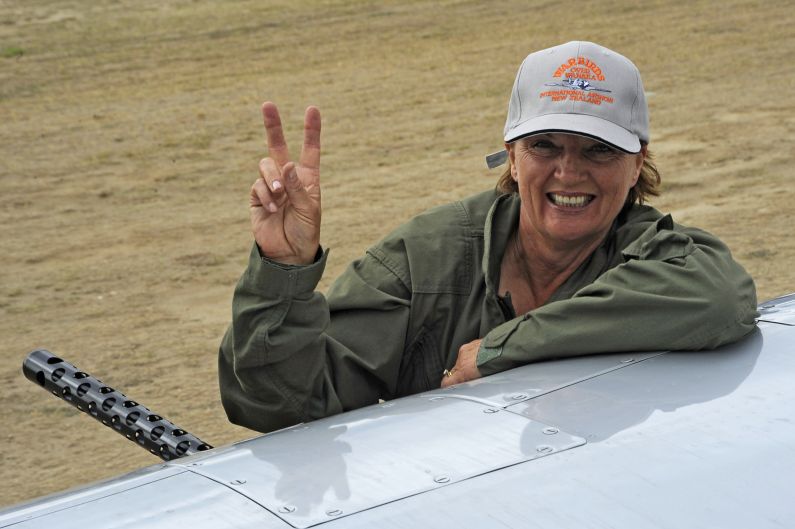 When it comes to the New Zealand Warbirds scene there is one couple which needs little introduction – Liz Needham and Frank Parker.

Liz and Frank have enjoyed long and varied aviation careers and have both displayed over many years in high-performance Warbird fighters at the Warbirds Over Wanaka Airshow.

Liz began flying in the 1970s, gaining a type rating in a Tiger Moth and became a flight instructor in 1976.  Her warbird journey began in 2003 when she secured a type rating in Harvard 1057 (an aircraft she would later own).  The next step was formation and safety training (FAST) and an invitation to join the NZ Warbirds Association’s flag-ship Roaring 40s Harvard aerobatic display team.

Over the years Liz has flown many other types including the P-40 Kittyhawk and Spitfire.  Liz is one of just two female Spitfire pilots in the world.  For a day job Liz has had a distinguished commercial career and up until recently was a B-777 captain and has clocked up more than 25,000 flying hours.

For husband Frank it’s been around half a century since he first flew solo at the Walsh Memorial Flying School at Matamata.  A 16-year career flying in the RNZAF was followed by a successful career as a commercial airline captain.

Frank first flew at Wanaka in the Roaring 40s team in 2000 and has been a regular display pilot since.
Liz and Frank have ownership interests in the Ardmore-based P-40 Kittyhawk and Harvard 1057 and are both long-time members of the New Zealand Warbirds Association of which Frank has been President for a number of years.

Their P-40 is a former RAAF 75 Squadron P-40N-1-CU.  Just 400 of this model were ever built and this remains the only one still flying.  Back in the 1970s the aircraft was recovered from New Guinea and brought to NZ by Charles Darby who teamed up with Garth Hogan to begin the restoration.

A feature of this P-40 is that it still has working machine guns and visitors to the 2022 Warbirds Over Wanaka airshow will get to see and hear the guns in action, both on the ground and in the air.

Harvard 1057 was one of 202 US-built Harvards delivered to the RNZAF in the 1940s.  Built in 1943 1057 was first stationed at Gisborne under the No 30 Torpedo Squadron.  The RNZAF disposed of their Harvards in the 1970’s and this particular aircraft ended up as a playground amusement.  It was later saved from that fate and was completely rebuilt from the wheels up to flying condition in 1998.

Frank and Liz agree that owning Warbird aircraft gives them a sense a pride.  Not only do they love flying the aircraft but feel they are doing their small part to help preserve this nation’s rich aviation history.
< previous story
next story >