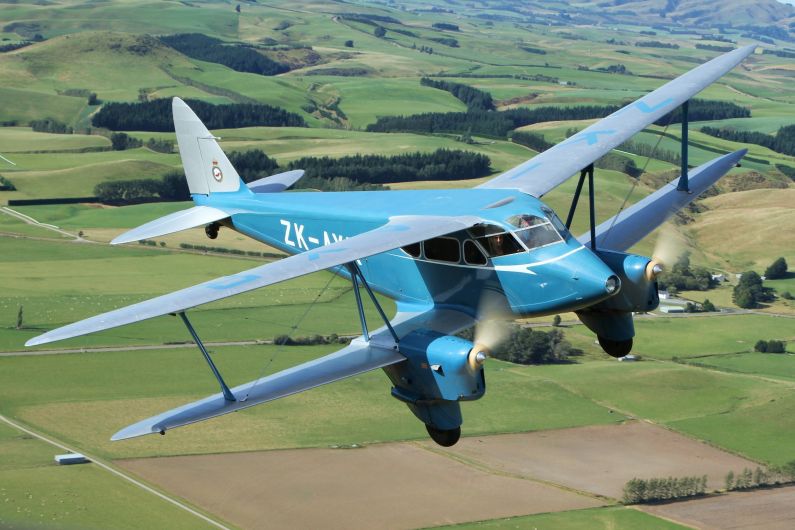 One of only two De Havilland Dragonfly aircraft still flying in the world will make a triumphant return to the skies at the Warbirds Over Wanaka International Airshow next Easter.

The DH-90 Dragonfly ZK-AYR “Endeavour” is operated by the Croydon Aircraft Company at Mandeville, near Gore, but hasn’t flown for a number of years. The Croydon team has been hard at work getting it airworthy again to be part of the Classic Aircraft Flypast at the Wanaka Airshow.

The Dragonfly was the last in the De Havilland series of biplanes and was designed as a twin-engined luxury aircraft with 66 built between 1936 and 1938.

Commonwealth countries had 23 Dragonflies in service at the start of WWII but by the end of 1945 only six of that number survived. The only other Dragonfly still airworthy today is in a private collection in the United Kingdom.

The Croydon Aircraft Company is also bringing the DH-89 Dragon Rapide Dominie which has the distinction of having been at every Warbirds Over Wanaka Airshow since the very first event in 1988.

Another aircraft which will feature in the Classic Flypast next Easter is Ronan Harvey’s Beech-18. This aircraft, which arrived in New Zealand in 2015, had a colourful past, including being used to run drugs between Mexico and the United States.

Also taking part in the display will be a Fox Moth, Chipmunk, Staggerwing, Waco and no less than three Tiger Moths. Airshow Display Planner, Andy Love, says over the years the lunchtime Classic Aircraft Flypast at Wanaka has become something looked forward to by many aviation fans.

“The sheer variety of these beautiful old machines flying together makes for a great sight while a number of them hold a special place in the memories of many visitors who remember the role they played in helping shape aviation in both New Zealand and Australia,” says Andy.