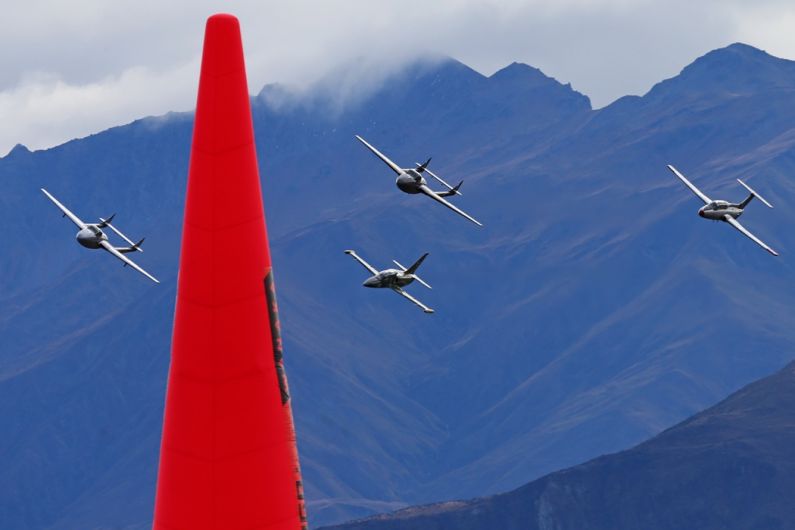 Due to popular demand, one of Warbirds Over Wanaka's favourite acts of the past few years is set to return for the International Airshow next Easter.

Jet Racing made its New Zealand Airshow debut at Wanaka in 2014 featuring pilots from Australia, New Zealand and the United States, wowing the crowd with precision flying around a tight race track at speeds of more than 600kph.

Four of the pilots from 2014 will be returning next April including Kiwi Paul ‘Huggy’ Hughan, who took out the winner’s trophy at the inaugural event flying John Currie’s Christchurch-based Vampire jet.

Huggy is keen to get his name on the trophy a second time. “The jet racing in 2014 was such a blast. A chance for a group of very experienced pilots to test their skills and aircraft against each other. While we were fierce competitors on the race track we were all good friends once the aircraft were back on the ground,” says Huggy.

American pilot and former Reno Air Races Jet Class champion, Rick Vandam is also coming back. “I had such a blast on my first visit to New Zealand. A beautiful country and such a wonderful Airshow. The racing was great and I’ve been itching to get back ever since,” says Rick.

A new pilot confirmed for next year’s Jet Racing is former US Air Force Thunderbirds pilot Paul ‘Sticky’ Strickland, who made his Wanaka debut in 2018 performing a jaw-dropping display in the same L-39 Albatros jet he will again pilot next Easter. Sticky is currently a member of the US-based Patriots L-39 display team which performs at big airshows across America.

The two L-39s Rick and Sticky will be flying are owned by Craig Mossman who operates them out of Tauranga. “We have created a successful business with the jets offering rides to the public. Our marketing is all about offering the ‘Ultimate adrenaline rush’ and that’s what we’re looking forward to bringing to Wanaka Airshow visitors,” says Craig.

If watching the Jet Racing isn’t enough, Airshow patrons can go to www.fighterjets.nz to book their ride of a lifetime in Wanaka next Easter.