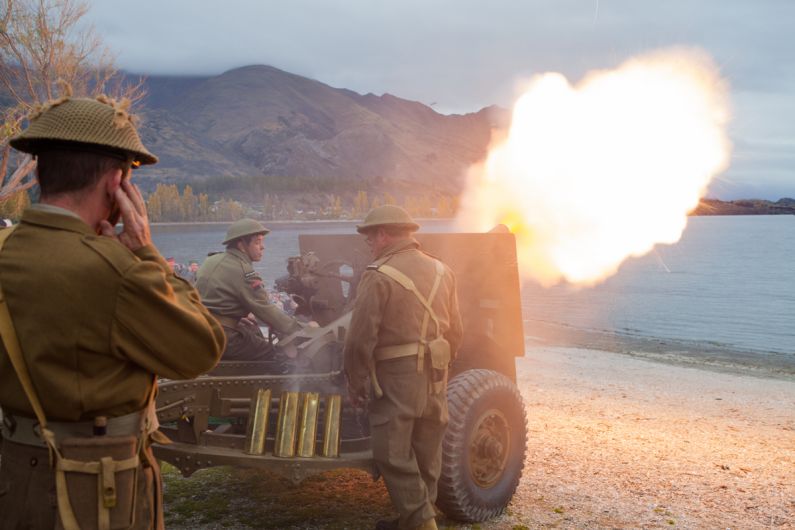 The Warbirds Over Wanaka Warhorse Re-enactor group is paying tribute to the role of field guns in WWII with a ‘barrage’ from at least seven 25-pounders and other armaments planned for the Easter 2020 Airshow.

This is thought to be the largest gathering, and mass firing, of field guns in the Southern Hemisphere for many decades at least.

One or two 25-pounders have been a regular sight at Warbirds Over Wanaka for many years, primarily as part of the Warhorse static display.  Since 2014 at least one of the guns has been fired across Lake Wanaka to start the community lakeside aerial display on Good Friday.

For the past two years the Re-enactor group has been trying to secure as many working field guns as possible for this Easter’s special display.  It’s hoped they will have at least five 25-pounders along with a number of 6-pounders backing them up.

The display will involve the guns being rolled out to form a battle line down the crowd line.  The command will be given and the guns will be fired one after the other, reloaded and fired again and again giving airshow visitors a glimpse into what it would have been like for the allied forces engaged in such famous battles as El Alamein and Monte Casino.

Re-enactor group spokesman, Darryl Brewer, says the ‘barrage’ has been a while in the planning and it will be quite a logistical exercise getting all the guns in position as quickly as possible and firing.

“The guns will fire one after the other to start with but then they’ll just fire again as soon as they’re ready so it will then just be a big wall of noise, just like it was during the big battles of WWII,” says Darryl.

The 25-pounder was the major allied field gun during the Second World War.  At El Alamein for instance there were some 800 of the guns deployed.  The 25-pounder was introduced just before the war started and was used by armed forces throughout the Commonwealth, including the New Zealand Army, for many decades afterwards.