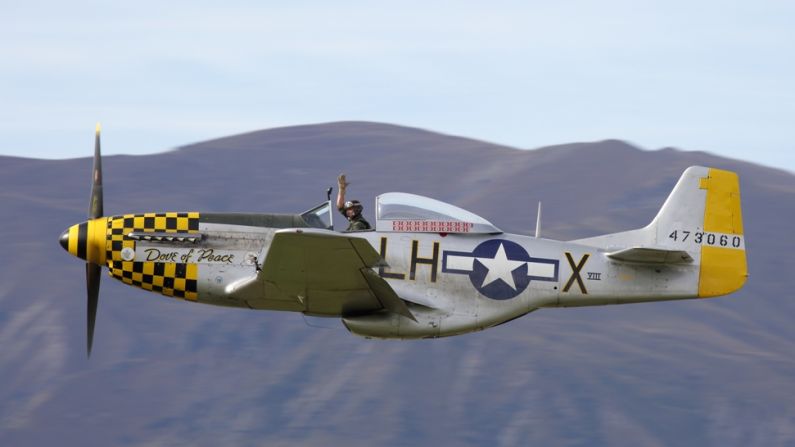 P51-D MUSTANG ON DISPLAY AT WARBIRDS AND WHEELS

A significant Warbird aircraft is now on permanent public display in Wanaka for the first time in 10 years.

Rob Broek’s P51D Mustang “Dove of Peace” is now on display in the Warbirds and Wheels museum at Wanaka Airport as part of a major refurbishment of the museum.

Rob has owned the aircraft since 2004 and in the early days it was on display as part of the now-closed Alpine Fighter Museum.  However, since then the only chance for enthusiasts to check out the aircraft in person has been at the biennial Warbirds Over Wanaka International Airshow.

Rob is happy the public now has another chance to appreciate the aircraft up close at times other than the Airshow.

“I know there are lots of visitors to Wanaka all year round who appreciate beautiful and significant aircraft and with Wanaka’s major connection with Warbirds it’s fitting they can once again see her,” says Rob.

The aircraft was built in 1944 and was shipped to Australia fully assembled in June 1945 under the Lend-Lease Agreement.  A copy of the original documentation, which details the record of this aircraft while on charge with the Royal Australian Air Force, recorded only 11 hours flying time on arrival in Australia and was registered A68-674.

With WWII drawing to a close, the aircraft was not allocated to a squadron but placed on “special reserve” and finally struck off charge in December 1948.  It was later stripped and disposed of.   The fuselage was purchased by a farmer in Victoria who used the airframe hydraulic fittings to keep his farm machinery going.  It then spent a further 20 years in the open in Mildura outside a museum.

Eventually it was sent to the USA in 1984 for restoration to flying condition.  During restoration the Mustang was sold by its Australian owners.  The aircraft eventually returned ‘down under’ in 2004 when Rob Broek brought it to Wanaka where it has remained ever since.

To this day the aircraft has one of the lowest timed airframes of any Mustang flying in the world.  The aircraft is painted to represent the “Dove of Peace” as flown by American WWII Fighter Ace Col. Glen Duncan.