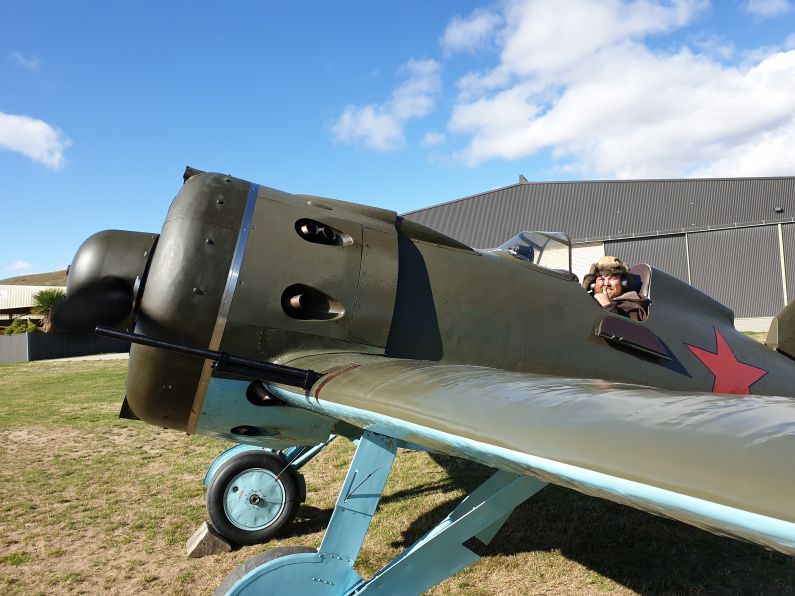 One of the stars of this Easter’s Warbirds Over Wanaka International Airshow has arrived in New Zealand after a long journey from Germany.

The Polikarpov I-16 is a WWII Russian fighter and was last in Wanaka at the 2008 Airshow. It was one of nine Polikarpov aircraft which were salvaged from Siberia and restored by Airshow founder Sir Tim Wallis back in the early 1990’s.

All nine flew at Wanaka airshows until 2008 when the collection was broken up and sold to Warbird owners around the world.
The aircraft which has been brought back for this Easter’s event is Polikarpov # 9 which is now owned by a collector in Germany.

Warbirds Over Wanaka enlisted the help of sponsors Hamburg Sud and Mainfreight to ship the aircraft from central Germany to Wanaka. It wasn’t an easy job as the aircraft had to be squeezed into an open top container and a special cover made to keep it dry.
On arrival at Wanaka the container was taken to an MPI-approved Helisupport hangar for inspection. It took a full day to prize the valuable aircraft safely out of the container and to get MPI clearance.

Chief Engineer Callum Smith, from Wanaka Airport-based Twenty24 Limited, led the team getting the aircraft out and then putting it back together and running the engine.

“These are pretty straight forward aircraft but there’s always the chance that something has got out of kilter during the whole process of shipping it halfway around the world. It was an unusually tight fit so we had to be ultra-careful. But it all seems to be fine and when we fired up the engine it sounded a treat,” says Callum.

Callum had done some work on the aircraft when it was previously here. “It’s amazing it looks exactly the same as it did when it was shipped out of here 12 years ago.”

The aircraft will be piloted by two-times World Aerobatic Champion Jurgis Kairys of Lithuania at Warbirds Over Wanaka. Jurgis will arrive at the start of April to test fly the aircraft ahead of the Airshow.