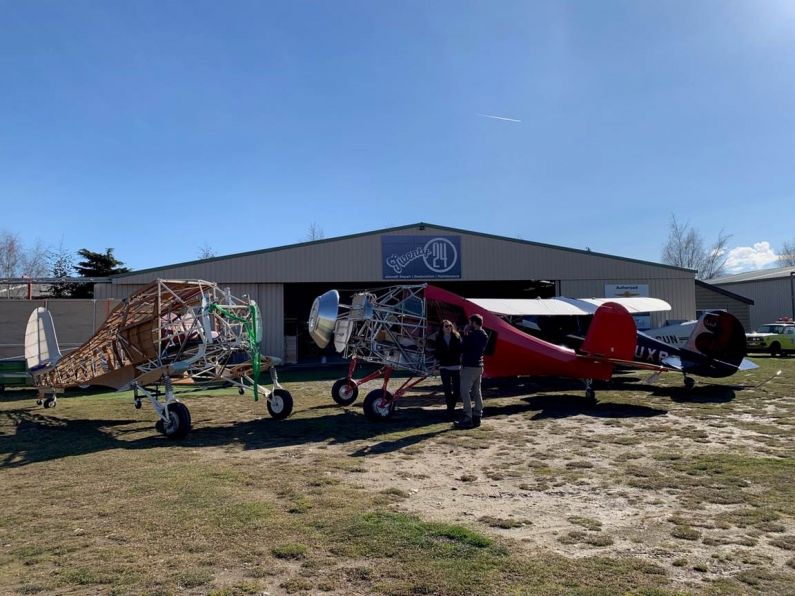 In a vibrant hangar at Wanaka Airport, a number of very significant aircraft restoration projects are underway.

The hangar is home to Twenty24 Limited, an aircraft restoration and maintenance company owned by Callum Smith and his wife Trish. With their team of talented aircraft engineers they have become Southern Hemisphere’s home of the Beechcraft Staggerwing.

These beautiful biplanes first rolled off the production line in the United States back in the 1930s. They were the Lear jet of their time noted for their fine craftsmanship, high quality exterior finishes, luxurious interiors and high-speed performance. Despite being built during the depression, these hand-crafted aircraft were not cheap and cost around six times more than comparable aircraft.

The name “Staggerwing” came from the fact that, unlike previous biplanes, their upper wing was set aft from the lower wing - an arrangement known as negative stagger. The aircraft soon became known as the Staggerwing.

Additionally, being one of the first aircraft in the world to sport retractable landing gear, Beechcraft decided it would increase sales, if they demonstrated the aircraft’s ability to land safely with the landing gear retracted. This was accomplished by fitting a skid to the lower fuselage and a brake to stop the propellers rotation, allowing a ‘wheels up’ landing to be made without damaging the aircraft.

Hong Kong based Australians, Cam and Tracey Hawley, own Staggerwing, C17B serial # 108. This aircraft was delivered from the Beechcraft factory to its first Australian owners in 1936. A number of years ago, Cam and Tracey decided to bring their Staggerwing to New Zealand for a complete restoration. Upon learning of Callum Smith’s skills, they engaged him to craft and complete a significant portion of this work.

Twenty24 Limited completed the award winning restoration in 2013 and the Staggerwing has since been displayed at a number of aviation events around New Zealand, including being an integral part of the spectacular classic aircraft flypast at the Warbirds Over Wanaka International Airshow.

In 2007, it emerged that another historically significant Staggerwing was potentially available in Australia. After some detective work, The Hawley’s located and recovered the fuselage frame of Staggerwing D17A serial # 357 from its remote outback Queensland location.

Known as the ‘Antarctic Staggerwing’, this aircraft was famously taken to the ice by Admiral Richard Byrd as part of his 1940 United States Antarctic Service expedition. It returned to the US to be refurbished before heading to Australia where it was pressed into service during WWII by the RAAF. Later it was converted for use in aerial agricultural work in Queensland until it crashed in 1963.

The restoration of this aircraft currently underway with Twenty24 Limited, will see it return to its original Antarctic configuration and livery. The fuselage has now been repaired, covered with fabric and painted and work turns to installing the Wright R760 engine and fitting out the interior. The intention is to have this aircraft display at a future Warbirds Over Wanaka Airshow and there’s even talk of a possible tour of the US, given its historical significance there.

Word of the outstanding results that Callum and his team have achieved with these first two aircraft has spread and another two Staggerwing ‘projects’ have recently arrived at Wanaka.

The first is D17S serial # 6763. This aircraft was originally built for the US Navy and was sent to Britain to be used by the Royal Navy Fleet Arm in 1944. A decade later it ended up in Australia. The aircraft last flew in 1999 after which it was stripped down for a rebuild which was unfortunately not completed.

Recently purchased by Allan Arthur of Albury, New South Wales, the Staggerwing was shipped to Wanaka so that the restoration could be restarted. Since then, rapid progression has been seen with the fuselage well underway in preparation for fabric covering. Allan has been a supporter of Warbirds Over Wanaka over the years and Callum was involved in the restoration of his P-40 Kittyhawk which flew at WOW back in 2006.

The fourth Staggerwing now in Wanaka has special significance in that it is the only one to ever be delivered brand new to New Zealand. C17L Serial # 107 (the next Staggerwing off the production line was VH-UXP) was bought new by the Auckland Aero Club with help from St John and was this country’s first dedicated air ambulance.

The aircraft eventually found its way across the Tasman where in 1966 it crashed on takeoff and hasn’t flown since. Qantas Captain Bert Smithwell found out about the wreckage and couldn’t bear to see it just ‘disappear’. He purchased the aircraft and stored it away in his garage in suburban Sydney where it stayed until January this year, when Bert passed away.

His family were keen to see it go to a good home and when Motueka man Don Grant came calling with Callum in tow, assurances were given that they would get her flying again and so a deal was reached.

Like Mainland Cheese, good aircraft restorations take time but it’s hoped that maybe one day all four will be flying at a future Warbirds Over Wanaka Airshow.

With his big reputation for fine workmanship, don’t be surprised if Callum doesn’t end up getting a few more Staggerwing ‘projects’ turn up in Wanaka.

In the meantime you can see VH-UXP fly at Warbirds Over Wanaka International Airshow and check out the others on display in Twenty 24’s hangar.

Photo:  Tracey Hawley and Callum Smith with three of the Staggerwings