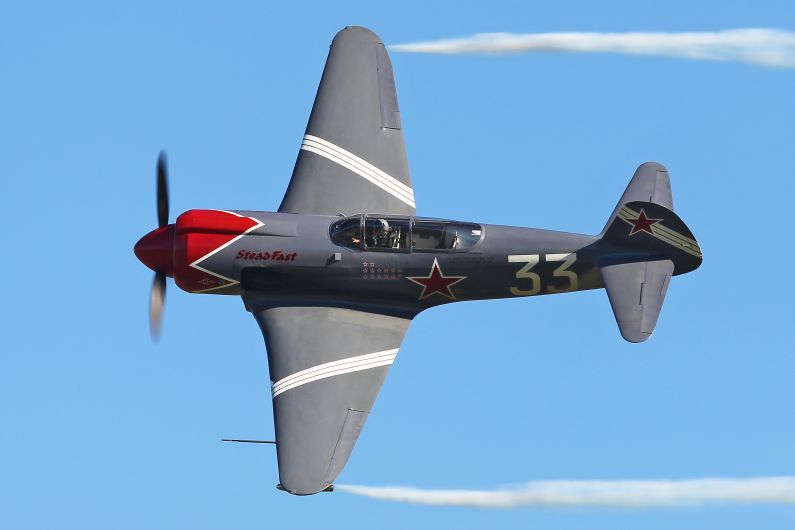 The latest Warbird fighter aircraft to find a new home in New Zealand will make its Warbirds Over Wanaka International Airshow debut at Easter next year (April 10th, 11th and 12th).

The Yak-3 known as ‘Steadfast’ has been bought by Blenheim-based owners, Mark O’Sullivan and Ronan Harvey. It arrived from Australia in September and is currently being readied for Wanaka.

The Yak-3 was one of the most feared WWII fighter aircraft due to their high speed and manoeuvrability, making them ideal in dog-fights.

In the early 2000’s a decision was made to build brand new Yak-3s based on the original prototype, this time fitted with powerful Pratt and Whitney R-2000 radial engines. The new aircraft were built in Romania and were snapped up by eager Warbird aircraft owners around the world.

‘Steadfast’ was exported to the United States in the mid-2000s, embarking on an illustrious career at the famous Reno Air Races. During that time the aircraft picked up nine world speed and climbing records, including reaching 655km/h over a 3km course in Utah. In 2013 the aircraft moved to Australia where it has been operating until this latest move across the Tasman.

Co-owner Mark O’Sullivan is rapt to have the aircraft in New Zealand and can’t wait to show her off at Wanaka. “This aircraft has it all with her beautiful lines betraying what can be brutal performance. The addition of a great smoke system means this aircraft will be something of a show- stopper at Wanaka,” says Mark.

‘Steadfast’ will be one of two Yak-3s performing at Wanaka. Graeme Frew’s Russian fighter ‘Full Noise 35’ has been a regular at Wanaka since 2012 and is one of several Warbird aircraft which will be available for joy rides over the Easter weekend.