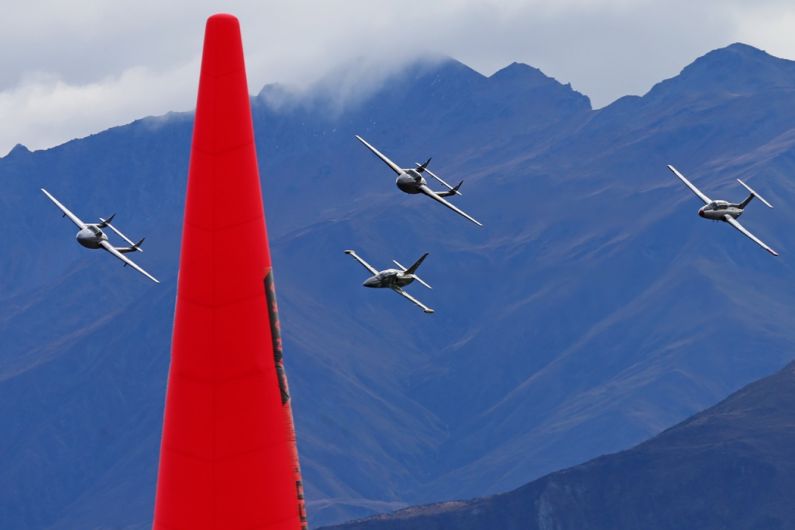 The world’s fastest motor sport has been confirmed to take centre stage at next Easter’s Warbirds Over Wanaka International Airshow.   Jet Racing, featured for the first time in 2014, with high-performance jet aircraft racing around a tight aerial race-course marked by large inflatable pylons on the ground.

Back in 2014 the Wanaka Jet Racing Championship was taken out by Hamilton-based pilot, Paul ‘Huggy’ Hughan flying a 1950s Vampire Jet.  Paul is returning in 2022 in an attempt to win the trophy for a second time. “The jet racing in 2014 was such a blast.  A chance for a group of very experienced pilots to test their skills and aircraft against each other.  While we were fierce competitors on the race track, we were all good friends once the aircraft were back on the ground,” says Paul.

Chasing Paul hard will be fellow Vampire pilot Brett Emeny, from New Plymouth; Tauranga’s John Mathewson flying an L-39 Albatros and Auckland-based Dave Brown at the controls of a Strikemaster.  Paul, John and Dave are all ex-RNZAF A4 Skyhawk fighter jet pilots, while Brett is a highly experienced formation aerobatic pilot across many Warbird types.

Warbirds Over Wanaka General Manager, Ed Taylor, says they had planned to bring back the event at the 2020 Airshow which had to be cancelled at the last minute because of COVID.

“We know this was so popular back in 2014 and after the disappointment of 2020 we’re rapt we’re able to stage it next Easter.  The sight of these aircraft hurtling around the race-course at high speed is something to be seen.”  He says the tight course means that the aircraft are in view for the entire time on each lap so Airshow visitors get to see all the passing manoeuvres.

The jets will race all three days of the Airshow gaining points for where they finish.  The winner will be the most consistent jet over the Airshow.

The official starter aircraft will be Graeme Frew’s WWII Yak-3 fighter aircraft “Full Noise”.  Graeme is no stranger to the sport having twice competed with distinction in the Unlimited Class Gold Final at the Reno Air Race Championships in Nevada, the holy grail of air racing.

If watching the Jet Racing isn’t enough, Airshow patrons can book the ride of a lifetime in one of the participating aircraft.  Go to www.fighterjets.nz to book a ride in the L-39 Albatros Jet in Wanaka next Easter.  Rides can also be booked in Graeme Frew’s Yak-3 fighter “Full Noise” at www.fighterflights.co.nz .