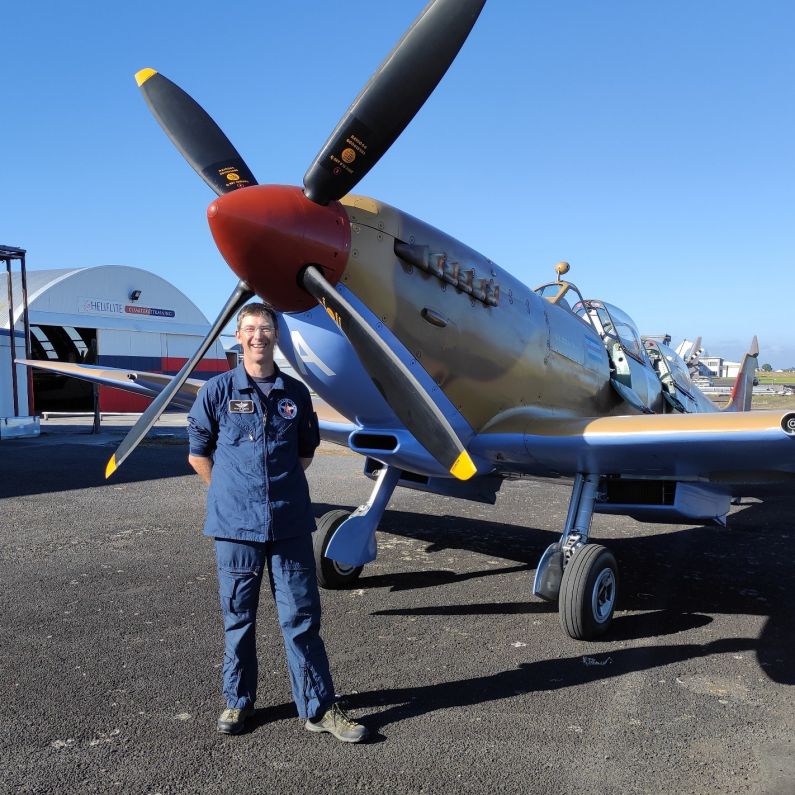 Ryan has used his scholarship funding to get a type rating in the Spitfire, realising a boyhood dream.  “I remember reading Commando and Battle Action comics as a kid.  It was always the flying stories that were first to get read and anything with a Spitfire, or Mosquito or a Russian fighter was always top of the list.”

Ryan says it’s everything about the Spitfire that attracts him.  “Although the history is very important to me, I find the mechanics and design of the aircraft and engine just as interesting.”

For his type rating Ryan flew Doug Brooker’s Ardmore-based two-seater Spitfire, with pilot Frank Parker instructing and Liz Needham, one of only two female Spitfire pilots in the world, giving valuable advice.  “It’s people like Doug, Frank and Liz and many others along the way, who have helped me keep the dream alive.  Also, I need to thank the Warbirds Over Wanaka Community Trust for the financial help which ‘sparked a fire to push further’ with my training.”

Ryan already has experience flying the Yak-3 WWII fighter and offers an interesting comparison with the Spitfire.

“The control harmony, roll rate, general balance and feel are better in the Yak-3 across the speed range but the wing design of the Spitfire is great, very forgiving and it wants to just fly and fly with no real want to let go without warning, whereas the Yak feels a bit more highly strung.  It would make for an interesting dogfight.  The Spitfire certainly has the turning advantage but the Yak could get in, out and away before things got out of hand.”

“Finally, I must say the approach and landing of the Spitfire is a positively gentlemanly affair with a fairly sedate threshold speed of 70-75 knots whereas in the Yak feels like your hair is on fire crossing the fence at 100 knots.”

Ryan is now looking to further his formation flying skills with the hope of working into formation aerobatics before too long.  And while he has acknowledged his mentors for helping him to get to this stage he is also giving back himself by helping a couple of other Warbirds Over Wanaka Scholarship recipients get type-rated in a Harvard.

One of those is Lachlan Falconer, who hopes to be flying with Ryan over the next few months.

Two other Scholarship winners are also still in the process of completing their flying time.  Wanaka-born Dan Pezaro has been getting time in an Auckland-based Harvard while Glenn Drower is looking to progress to more aerobatic and formation training over the next few months.