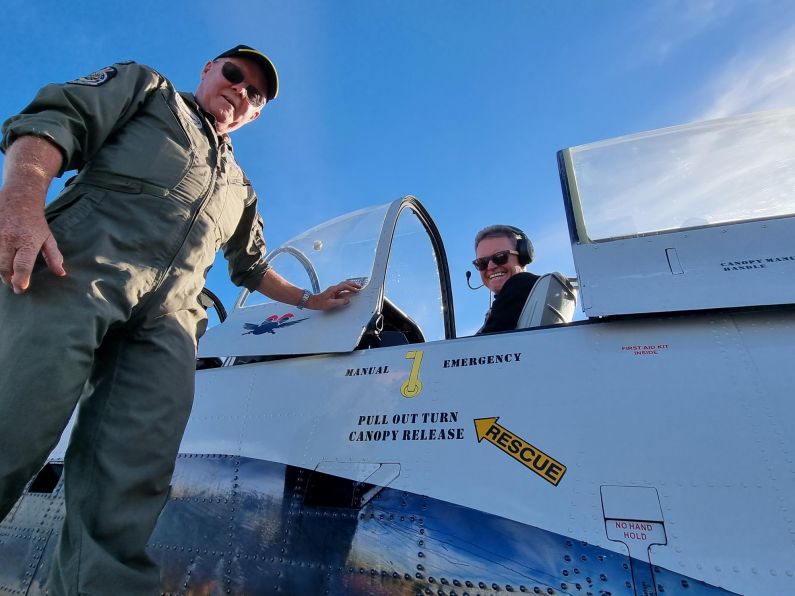 Like many other regions around the country the Queenstown Lakes District has been doing it tough since the arrival of Covid back in March 2020.  A number of businesses have closed and others are just hanging on.

This Easter should have seen the town buzzing with tens of thousands of visitors from around the world for the biennial Warbirds Over Wanaka International Airshow.  Organisers were forced to cancel the 2022 event, the second Wanaka airshow to fall prey to Covid restrictions.

Taranaki-based pilot Brett Emeny lives for airshows.  He’s been coming to Wanaka for three decades and is one of the airshow’s most accomplished pilots displaying many different aircraft types including the Vampire Jet, T-28 Trojan, Catalina Flying Boat and as a leading member of the world-class Yak-52 aerobatic display team.

Last weekend there were visitors in Wanaka, many of them had been coming for Warbirds and decided to still come and enjoy this beautiful part of the world.  One of them was Brett flying in in his Trojan Warbird.

Brett was generous enough to put on a couple of impromptu displays over the Wanaka lakefront over the weekend.  The reaction from locals and visitors alike was immediate.   If they were outside they stopped where they were and looked skyward while others rushed out of businesses and homes to see the Warbird action.  All of them had huge smiles on their faces.

As General Manager of Warbirds Over Wanaka it was a bittersweet experience.  It reminded me of what should have been but it also reminded me why the Warbirds team put so much time and effort into our event.  It’s the joy people get from the airshow that is so rewarding plus of course the major economic boost it provides for our town.

While Brett was here at Easter he offered to take me up for a spin in the Trojan.  I jumped at the opportunity.  The T-28 is an imposing aircraft on the ground.  After clambering up into the cockpit using hand and foot holds I was strapped in by Brett.  The conditions were perfect but I was still impressed by the smooth takeoff and flight.

As we flew over Lake Hawea and then Lake Wanaka I realised why people get hooked on owning Warbird aircraft.  They all have their very own history and when you’re flying in them your imagination runs riot wondering what this aircraft may have got up to during its life – who may have flown it and where it might have flown.  Brett then managed to make my tummy feel like it had left my body undertaking a wing-over manoeuvre pulling 3 G’s.  A small taste of what he goes through numerous times in every aerobatic display he performs.

A huge thank you to Brett and his family and friends.  Firstly for coming to Wanaka to support our town but especially for bringing a bit of joy and reminding people what Warbirds means to this town.  Brett has already confirmed he and his mates will be back in force at Easter 2024.   It will be six years between airshows and it is already shaping up as the best ever.